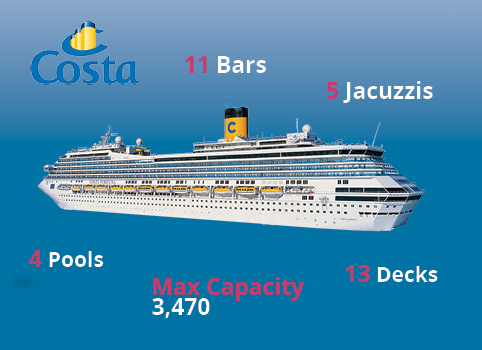 It is immediately obvious that Costa's largely European passenger base is the inspiration for the design of the Fortuna vessel. Constructed to a similar schematic to the Carnival Triumph and boasting many of the same amenities - high balcony ratio, an alternative restaurant and a fancy decor - this is a ship to be reckoned with.

So let's start with the decoration. Design master Joe Farcus has blended the European feel with US-style comforts, meaning you're likely to value every second aboard the Fortuna. Each public room has been inspired by - and is named after - a particular Italian ship. There's elegance aplenty combined with a slight whimsical feel that comes from the many lively and colourful extras.

Your average cruise is likely to have a sizeable number of North Americans aboard, around 15 per cent in all. The ship is also popular with Italian, German, Spanish and French passengers, which means that all important announcements are repeated in five languages.

When getting dressed in the mornings, casual is the name of the game. You'll want to get changed to smart casual in the evenings and a typical seven-day cruise will require attire for one formal and one semi-formal night.

This is where the European influence really comes out. For breakfast, expect traditional cruise meal offerings such as omelettes made to order, along with a buffet of cold meats and cheeses. Naturally, the usual suspects of Danish pastries and cereals will also be present. Treat yourself to an a la carte breakfast at elegant Raffaello or the beautiful Michelangelo restaurant. You also have the chance for a later breakfast until 11 at Buffet Cristoforo Colombo, giving you the opportunity for a less rushed morning.

For lunch dabble in the burger grill, perfect for children and adults looking for a classic burger and chips. If that doesn’t tickle your fancy why not go for Cristoforo’s buffet, with many different specialities to choose from - the options are great.  The buffet even turns into a perfect candlelit pizzeria from 9pm, until 2am. For dinner, try the stylish Club Grand Conte 1927. It has a romantic atmosphere with a piano player almost always present.

Entertainment is huge on Costa Fortuna, with over 13 bars and lounges to check out. The large venue, Rex Theatre, has three levels and is a magical spot which offers music shows, cabaret, and parties every week.  It’s a great choice for the family, where you can create unforgettable memories.  The Discoteca Vulcania is the place to go for a boogie, with bold colours and an impressive dance floor. You can be sure this club will leave you dancing to the early morning. We can’t forget the Casino Neptunia, a popular casino with thrilling energy. The children onboard enjoy as much as the adults with Squok Club, which is home to all kinds of kid’s activities, parties, and games.

For leisure, there are four pools onboard, one of which is especially for children. There is also a running track and a tennis court, so if you enjoy getting your blood pumping, there are a few things to choose from. The Wellness Centre has a huge gym located in the fore of the ship, allowing for those breath-taking views whilst training. Then, cool off in the Terme Saturnia Spa located on the Cannes deck. Relax in the Jacuzzi or steam room, and try refreshing treatments such as a Turkish bath, and facial treatments in the Venus Beauty suite which has a beauty and hair salon.

Are you rebooking a cancelled cruise due to Covid-19?

Enter your cancelled booking reference to use your future cruise credit

You do not have any future cruise credit