How To Play Shuffleboard At Home


One thing you may miss about cruising is being able to play a quick game of shuffleboard with your loved ones as you enjoy the gorgeous weather and sea breeze on the top deck of the ship. That being said, there’s no reason why you can’t knock up a make-shift game of the popular cruise pastime in the comfort of your own home.

This popular cruise deck game was first enjoyed in 1532 in England, and in more recent years has become a staple piece of a large variety of cruise lines, allowing passengers from all over the world to mingle over a lighthearted game. They’re usually found on the promenade deck and the perfect way to have some fun outdoors, especially on sea days.

Aim of the Game

The main aim of shuffleboard is to propel discs onto a scoring board at the opposite end of the ‘court’. To score, launch your discs into different areas of the target for different points depending on where it lands. If playing with one triangle, in some interpretations they say you can't hit or touch the opponent's discs already in the areas, allowing you to tactically cover the good spots early on, while in other versions you can actively shunt each other - just decide which version sounds more fun to you beforehand.

The game court consists of two triangles both pointing inwards toward the center of the court, with about a 12-foot gap between the tips. If you don’t have room, one triangle will do. Inside the triangles, you’ll find the scoring zones, values at 7, 8, 10 and 10-off (where you’ll be deducted 10 points). Typically, you use the cue to propel your discs into the scoring zone on the other side of the court to score points. The more points you score, the better, as whichever team reaches 75 points first, or alternatively finishes the 10th round with the most points, wins the game.

Use the masking tape to make 2 triangles, (one at each end of the court). Make sure you smooth over the masking tape too so there are no creases/air bubbles which could stop your disc moving across the scoreboard. Ideally, the space between the points of both triangles should be 12-foot, but no one will know if you have to shorten this a bit. You want to try and make the triangles as identical as possible in terms of size and shape so that the game is fair, so feel free to grab a measuring tape out to help with this!

Within the triangles, set up the scores like so with the masking tape, and again smooth down so there are no creases. As it would be difficult to add the scores into the board, leave them blank and have a printed out scoreboard or create your own to have at hand so you’re reminded what the scores are (top triangle is 10 points, the two boxes below are 8 points, and 2 below that are 7 points)

Now you need to add on the -10 area to the bottom of both triangles again with the masking tape and your scoreboards are pretty much done! 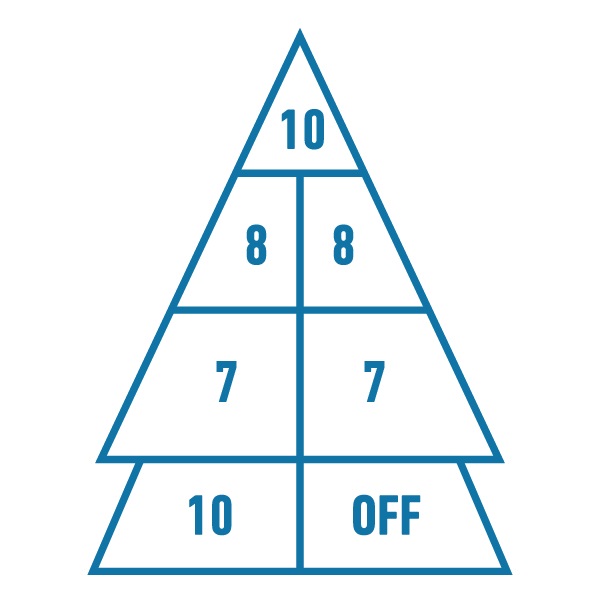 Now it’s time to let the game begin! Toss a coin to decide which team goes first as it’s an advantage to go last. If you want, you can play rock, paper, scissors instead! Then gather your pucks and cues and stand at either end of the court behind the scoring triangle.

Whichever team won the coin toss gets the first go at moving their first disc smoothly with their cue, aiming for the scoreboard at the other end of the court.

After the first team has tried, the second team will have their go and this alternates one after the other until all 4 pucks from each team have been played, which is when you will know the score of the first round. Make sure you keep note of the scores, as the first team to reach 75 points wins, unless this isn’t done within the first 10 rounds, then whichever team has the highest score after 10 rounds wins.

After each round, teams must swap sides to keep the game fair. Whichever team wins the round before gets to play first in the next. Keep playing rounds until one team has scored 75 points or the 10th round has been played and then you will have your winner. 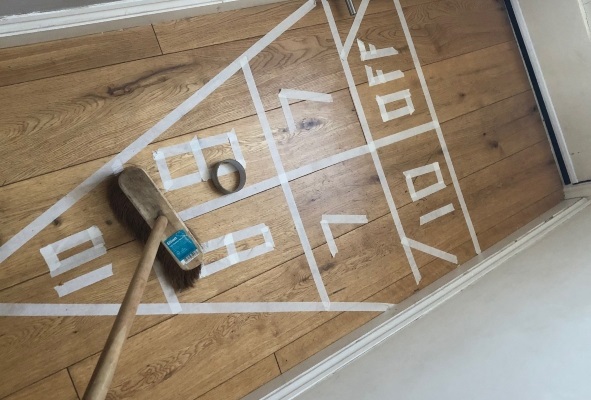 Rules of the Game


Who’s to say that you can’t adapt the game!? Why not get out in the fresh air, grab some chalk and set up a court in the garden? Without a slippery surface, you could always aim to throw a beanbag or something similar into the scoring board and go from there. Get creative with it and let us know how you get on! If you loved shuffleboard, you'll also love the other cruising at home activities we've suggested, including DIY spa treatments and a cruise-themed quiz.


Back to cruise guides and features Go