We Interview Scott Grayson from ITV's The Cruise

Updated January 2018
Princess Cruises is back with a new series of hit TV show The Cruise, and we'll be tuning in each week to get our dose of life at sea with Princess Cruises.
The show documents life onboard Princess Cruises' flagship Royal Princess, and covers everything from day to day life, to the guests, the crew, behind the scenes, and lots more.  In order to get a unique insight into the show, we were delighted to be able to grab some time with busy Hotel Engineer, Scott Grayson, to hear about his time onboard - on and off camera. 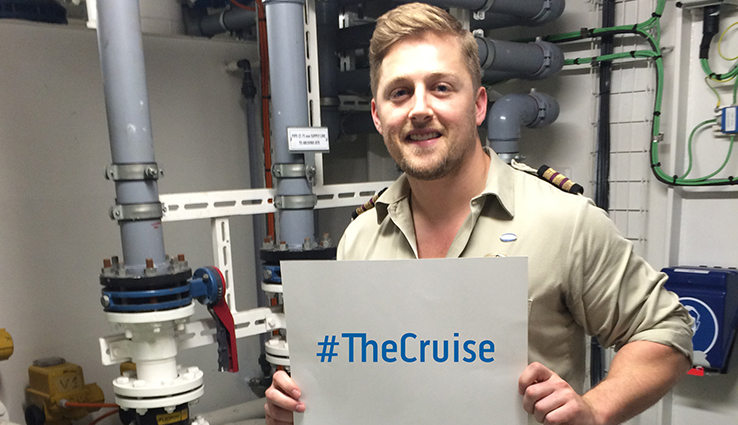 Planet Cruise: You’re starring in ITV’s The Cruise for another series! How did filming go this time around?
Scott Grayson: It was much easier being filmed as I knew what to expect from the process and instantly felt at ease with the cameras.
PC: For those who may not have seen the series previously, tell us about your role on the ship…
Scott: I am the hotel services engineer. Therefore, it is my responsibility to fix and maintain anything that isn’t involved in the ship moving. Basically, anything from coffee machines to toilets!
PC: What is a typical day like for you onboard?
Scott: I really don’t have a typical day. You never know what is going to need fixing so in my job you just need to be flexible and react to situations.
PC: Were there any moments when you wished the cameras weren’t there?
Scott: I was filmed fixing the toilet vacuum system which potentially was not one of my most ‘glamorous’ moments!
PC: Series two was filmed onboard Princess Cruises flagship, Royal Princess. Although Royal Princess and star of series one, Regal Princess are sister ships, do you have a preference?
Scott: Even though the ships are the same layout they actually feel different when you are onboard. I loved my time onboard Royal Princess but Regal Princess will always feel like home.
PC: What was your most memorable moment onboard whilst filming for season two of The Cruise?
Scott: I will never forget the day filming in Santorini. It was my first visit and I had so much fun with Timothy plus the views are stunning!
PC: You’ve been living and working at sea for many years now, any top tips on packing for a cruise?
Scott: Only pack essentials and leave plenty of space in your case for all the new clothes and items you collect along the way.
PC: Having travelled far and wide, which would you say has been your most memorable port of call?
Scott: Grand Turk in the Caribbean just for the pure simplicity of it, the beach is gorgeous and its right on your doorstep with all the amenities you need, if you head a little further down the beach you’ll hit a bar called Jack Shack, great place to unwind with a cocktail or two in hand.
PC: Where in the world would you like to cruise next and why?
Scott: I would love to visit Alaska as it is one of the places I have never been, everyone says it is amazing! I really want to get out and see the scenery and wildlife.
PC: For someone embarking on their first cruise with Princess Cruises, what would you suggest they can do to make the experience extra special?
Scott: There is so much happening onboard that I would suggest first time cruisers really take the time to find out everything going on to make sure they don’t miss out on anything. Also, make full use of your time ashore, be that exploring alone or on a Princess tour. Asking the crew onboard their top tips in ports is a great way to find places off the beaten track.
Watch The Cruise on ITV, Thursday evenings at 8:30 pm and join in the social conversation using #TheCruise @planetcruise
life onboard, princess cruises, royal princess, regal princess, the cruise More on:
Back to cruise guides and features Go

Are you rebooking a cancelled cruise due to Covid-19?

Enter your cancelled booking reference to use your future cruise credit

You do not have any future cruise credit