For an unforgettable expedition experience that will take you to one of the world's most untouched regions, Antarctica cruises are the obvious choice. With breathtaking scenery stretching as far as the eye can see, you'll be met by the native wildlife that calls this spectacular continent home such as penguins, seals, orcas and whales.

From colonies of sea lions and penguins to breathtaking whale sightings, you'll get to see what makes Antarctica so special. What's more, with cruise ships designed specially to explore this remote area, you can expect to explore in complete comfort and style. Plus, thanks to the dedicated and knowledgeable crew onboard, you'll be sure to get the most out of every moment.

The journey to Antarctica is long and because of the raw nature of the destination can be determined by weather conditions. Normally a cruise will combine countries in South America such as Uruguay, Argentina and Chile and then continue on, sailing south across the Drake Passage, the stretch of sea between Cape Horn and Antarctica.

Although it is an adventure to travel to the Antarctic region, it does not necessarily have to be uncomfortable. You are unlikely to have Broadway style theatre productions and comedy nights as on board entertainment, but instead there will be experts such as geologists, nature specialists and scientists giving lectures about the ports of call, offering fascinating insights and sharing their knowledge. The cuisine is likely to be tailored to the location too, with South American specialities and fresh fish, all paired perfectly with an excellent wine list.

In addition, South America and Antarctica cruises are also a popular itinerary. Head down the coast taking in the delights of Latin America before heading over to the Antarctic to see penguins, walrus, orcas and leopard seals in their natural habitat of sheer glaciers and deserts of snow. 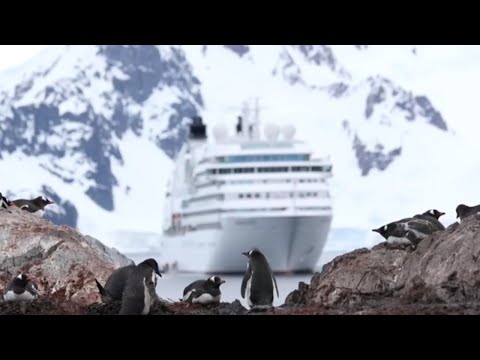 The ships that visit this remote and precious part of the world are designed specifically for the challenging ocean and weather conditions, smaller in size and with shallower, ice-breaker hulls, they are perfectly suited to the icy seas and minimise their impact on the fragile environment. Hurtigruten’s MS Fram is one such ship and sails in the Arctic Circle and the Antarctic. For a more luxurious experience Silversea’s Explorer, Seabourn’s Quest, Holland America’s Zaandam, and Celebrity’s Xpedition all sail to this region and combine the delights of their personalised service, gourmet cuisine and sumptuous ships with the wonders that nature has provided as a destination.

While there may not be a native human population in Antarctica, there are still those who spend a lot of time here thanks to the research station. Because of this, you might just be lucky enough to catch one of the events that they put on:

Icestock Music Festival- held as the New Year arrives at McMurdo Station, this small festival welcomes solo artists and bands to perform, as well as hosting a BBQ.

Moving the Pole- at the South Pole Station, the South Pole is on a sheet of ice which moves throughout the year, meaning that on the 1st of January every year it is readjusted.

When it comes to cruises to Antarctica, you should expect the weather to change throughout your voyage. With the cruise season running from November to March, the most popular times to travel are December and January when temperatures are more manageable. However, even at this time of year when daylight hours are at their longest, you should still expect everything from snow and sleet to sun and blue skies, as well as temperatures fluctuating between above and below freezing by the hour.

Unlike cruises to other parts of the world, cruises to Antarctica don't involve bustling ports of call. Instead, shore excursions will involve exploring more of the vast landscape which makes this continent so striking.

hen disembarking from your ship you'll be taken ashore onboard zodiacs. These small boats will transport you to exciting spots such as Deception Islands and its active volcano, the Argentine research station on Half Moon Island or Port Lockroy, a disused British station set up in secret during World War II.

The many types of penguin and seal populations, mighty whales and bird colonies, including magnificent albatrosses, are not fearful of humans because there has never been a native population on the continent to threaten them. Visitors will be able to witness the animals in their natural habitat, going about their business, tending to their young, feeding and surviving. The landscape that forms the backdrop is grand and stunning and cannot fail to remind the visitor of the great strength and power of nature. The vast ice shelves and the enormous snow covered mountain ranges are sights to behold and will live long in the memory, trumping all previous holiday destinations.