4 Thrills that can only be experienced in Svalbard

If you're looking for an adventure like no other then you may find that you have to go the end of the earth to get what you're after. In fact, increasing numbers of people are heading off on polar cruises in order to satisfy their craving for excitement, and it's pretty safe to say that no one comes home disappointed.

An Arctic cruise is a fantastic option for anyone who wants to really step into the unknown and experience a range of thrills that simply can't be found anywhere else on the planet. Indeed, simply knowing that you've left the civilised world behind and stepped into a realm where only the hardiest adventurers have ever set foot is something of a rush in itself, and once you begin exploring you'll come across a host of other unbelievable sights and attractions that you never dreamed you'd ever get the chance to experience.

Svalbard is the perfect destination for such a voyage, as the islands that make up the archipelago are brimming with amazing wildlife and breathtaking scenery. Here's a look at a few of the things that can only be experienced in this remote wilderness at the very top of the globe.

The islands of Svalbard lie between the latitudes of 74 and 81 degrees north, which means they are well inside the Arctic Circle. Because of this, they experience what is called the polar day - also known as the midnight sun - whereby the sun does not set for several months during the summer. In fact, the great life-giving orb doesn't even budge from its highest position in the sky for several weeks either side of the solstice, which means it constantly feels like noon.

This can be a somewhat disorienting experience, and sometimes makes it difficult to remember to go to bed. In fact, the entire concept of time tends to melt away when you're this far north, as the whole summer becomes one long day. You could call it the longest day on earth.

People come to Svalbard for many reasons, although if there's one thing that everyone wants to see more than anything else it's polar bears. The animals are native to the islands, so it's highly likely that you will spot a few during your voyage, although it's worth bearing in mind (no pun intended) that they are notoriously elusive, so there's no guarantee that you'll get what you're looking for. That said, the vast majority of cruises around the islands do include at least one or two sightings, and you can rest assured that the crew aboard your vessel will be keeping a constant look-out for the bears, and will notify all passengers over the PA as soon as they see one - no matter what time it is.

As you'd imagine, there's an awful lot of ice in Svalbard, and in fact around 60 per cent of the islands are covered by glaciers. These enormous, ancient sheets of ice often feature front walls that are several kilometres long and as high as a block of flats, making them a real sight to behold.

What's more, while the glaciers that you come across when sailing around Svalbard may be frozen, they are far from static, and regularly calve into the sea. Watching colossal blocks of ice fall from the glacier and smash into the water is a truly electrifying experience, as it generates a huge amount of energy. This is manifested in the form of an almighty thunderclap, and is often followed by a flurry of avian activity as nearby birds pounce on the thousands of confused fish that tend to lose their bearings and swim to the surface immediately following an ice-fall.

One of the most exhilarating elements of any Arctic voyage is the sense of unknown. In fact, you'll be told as you board the ship at the beginning of your journey that the route you take will have to be decided on as you go, as it will depend on the ever-changing pack ice. As such, there's never any guarantee that you'll be able to reach the northernmost point of the archipelago, but if you do manage to cross the magical 80 degrees north line, you'll have the satisfaction of knowing that you're only 600 miles from the north pole, and for a short period at least, the northernmost people in the world. 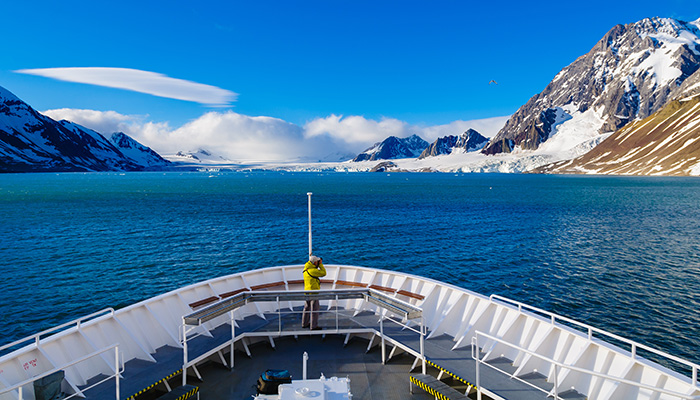