When it comes to parties, Barcelona throws a good one. Whether you like your celebrations steeped in tradition and full of atmosphere, or prefer a more outrageous affair, the Catalan capital caters to all tastes. Throughout its calendar, there are plenty of special times of year to be celebrated. If you're looking to time your holiday with a unique celebration. Take a look below at our selected picks.

You're in for a treat if you're in Barcelona during the Fiesta de Gracia. This spectacular street party takes place across a whole week in August, and sees many carnival floats and parades through the barrio of Gracia. Pop-up bars appear in the roads and whole areas are closed off to vehicles so that revellers can enjoy the atmosphere uninterrupted. Streets are generally decorated by theme, with enormous papiermache models being hung up over the heads of visitors - dinosaurs, fish, bats, umbrellas; an extraordinary variety that shows off the inventiveness and creativity of the Catalan people. There is food to eat and a programme of live music to enjoy late into the night. 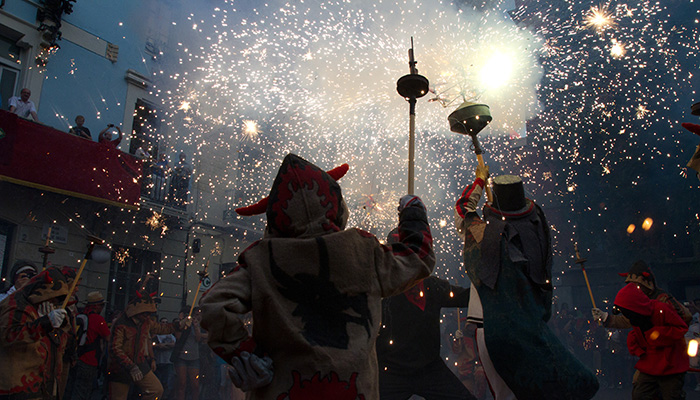 Two days after the Gracia festival ends, the Sants festival starts. Another neighbourhood gears up and celebrates the party spirit with plenty of atmosphere and excitement from all involved. There are bouncy castles, chocolate feasts and even a butifarra sausage nosh-up that celebrates Spain's love of dried meat. But best of all are the fireworks and fire parades. The devils take to the streets at around 9:30pm as the sun goes down before filling the air with sparks and flames. Of course, there's an element of danger about proceedings, so if you're of a nervous disposition, it might be better to go along to the children's one, which happens earlier in the evening and is much less violent.

Taking place in June every year, the celebration of Sant Joan sees most of the Catalan people retreat inside to enjoy sardines on toast with their families and friends, as fireworks fill the streets. For the tourists, however, this is one of the wildest parties of the year. Visitors to the city head straight to the beach where huge bonfires dominate the coastline. Watch in terror as local children try to leap over the flames, before heading along to one of the beach bars which are converted into clubs for an evening of partying on the sand. Discover more about the different neighbourhoods of Barcelona, and where to go depending on what you are looking for.

In September, the celebration of Barcelona's main patron saint offers a wild variety of events that range from the outrageously eccentric to the strangely orderly. At one end of the spectrum, Barcelona's famed Devils sprint through the streets letting off fireworks. On the other, large circles of people congregate outside Barcelona Cathedral to dance the Sardana, Catalonia's national dance. Join in if you feel confident - anyone can have a go, but take care! It's harder than it looks! Also worth watching are the parades that feature giant papiermache people that tower over the crowds. They are generally dressed up to resemble princesses, sailors and famous figures from the past. 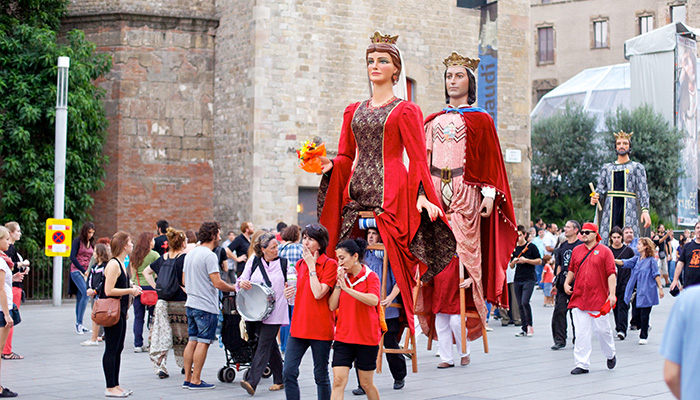 Children growing up in Barcelona are lucky indeed to have not only one Christmas holiday but two. Known as El Día de Los Reyes or The Day of the Three Kings, this annual celebration takes place in January - just two weeks after the traditional Christmas Day. As the name implies, the date commemorates the three kings that gifted baby Jesus with gold, frankincense and myrrh. In their names, the gift giving and receiving resumes, while a huge parade takes over the central district of Eixample. If you're looking for the fun, head to Plaza Catalunya and follow the crowd.
Browse our cruises that visit Barcelona.
spain, barcelona, city tour, culture, Festivals, nightlife, Mediterranean culture More on:
Back to cruise guides and features Go

8 Creepy places you can visit on a cruise
Can I benefit from attending a cruise show?
Themed Cruises
Barcelona F1 Grand Prix
Happy St Patrick's Day 2016