Cruises can carry you from one destination to a vast array of others, full to the brim with beauty and new experiences. However, that’s not all; there are some special cruises which take passengers across the globe to see some of the world's most renowned firework displays. For some wanderlust inspiration, you can find below seven of the top displays to see from the decks of the best cruise ships floating around - and don’t forget to check out the video!


The Feast of Sant Joan – Barcelona

Also known as the Summer Solstice and the longest day of the year, this event is a strong cultural celebration for the people of Catalonia and is celebrated across the entire city of Barcelona. Belief dictates that the sun represents an influential symbol of fertility and wealth, and thus the festival acts to provide strength to Sant Joan for the descent into the shortest night of the year. The fireworks display is unlike any other, as it involves the celebrations of many individual parties joining to become one festival. The night is filled with bonfires, handheld pyrotechnics, and a plethora of coloured lights. As one of the most anticipated nights in Spain, this is one for your ‘must-do’ cruise list. While harboured up, you can choose to explore the city on foot or watch the city come alive from the ship’s deck. Either way, the night is guaranteed to be exciting.

As a celebration of a monumental turning point in the French Revolution, Bastille Day is celebrated throughout all of Paris. A highly recommended vantage point would be from the Seine, whether on a Seine river cruise ship or on a Bateaux-Mouches boat excursion during a cruise and stay holiday. On the river you will find yourself sailing past the great monuments of Paris; Le Louvre, the Eiffel Tower, Notre-Dame Cathedral, and more, whilst their backgrounds light up in vibrant hues ranging from deep lilac to electric blue. 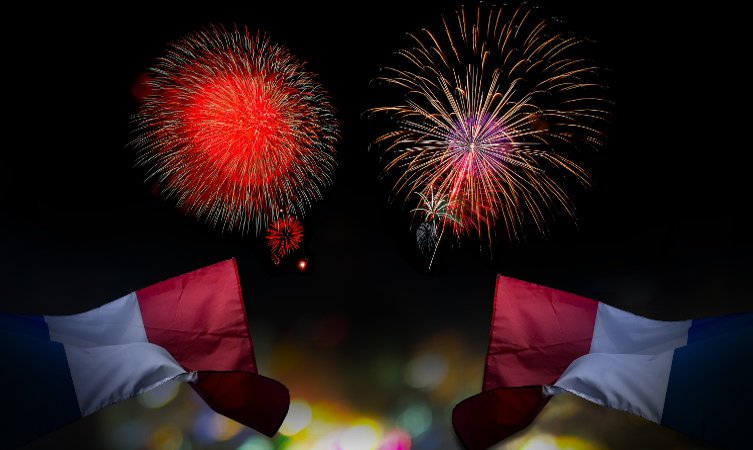 ‘Remember, remember! The fifth of November…’ This day celebrates the foiled plans of Guy Fawkes to blow up the House of Lords along with King James I, and thus England finds itself covered with bonfires burning an effigy, or a ‘Guy’, as well as fireworks blasting from almost every home and open space. Indeed, this includes the great ports where many cruises begin, including Dover, Southampton, Leith, and more. This lively night is best explored by foot, so leaving the cruise ship and finding – with no trouble – a Guy Fawkes celebration will lead to an extremely memorable night.

This celebration is worldwide and is, of course, the celebration for the arrival of a new year. One of the best ways to experience the spectacular shows that countries across the world put on is from the deck of a ship. Amsterdam, the city known for its intricate canals and lively nightlife, has a great show which can be seen from your ship’s decks, or, if you fancy a night off the ship, from the A’Dam Tower as the fireworks send up light from all over the place! Alternatively, if structured shows are not your thing, the canals and main squares host unofficial street parties with fireworks being let off on every bridge and open space to be found.

In classic American ‘Land of the Free’ style, this annually celebrated New York extravaganza is one of splendour. Boasting a 30-minute long show, over 56,000 shells to launch, and pyrotechnics set to mirror the U.S. Air Force Band’s playing, this event is always a spectacular one. And even more so from the best seat going; on the deck of a cruise ship, drink in hand, with an up-close and clear view. 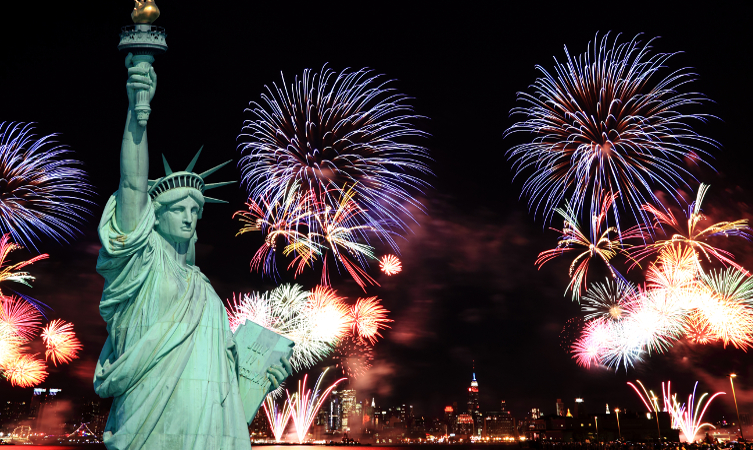 The third week of July

This lesser known festival is a celebration of the end of an epidemic plague which lasted for two years in the 16th Century in Venice. At one hour long, the fireworks display lights up both the sky and the water as the beautiful reflection can be seen in the Grand Canal and the open water known as St Mark’s basin. This waterway fills with small decorated boats and floating pontoons making it one of the most atmospheric, and arguably the best, audiences in the world. Following the display, many people head over to the island Lido, where you can sit on the sand and wait for dawn. A fitting finale to the night, allowing cruise passengers to join in the event in a more interactive manner if they so wish.

This is unlike most other displays in that there is no set day or location for the celebration, rather there is a tradition that over the two months everyone and anyone in Japan can host their own displays. It is a historical event that has embedded itself as an integral part of Japanese heritage, and some shows now draw crowds of around one hundred thousand spectators. If you’re lucky enough to visit any of these events on a cruise ship you will find people dressed in traditional Yukata robes, and streets lined with stalls for food and games. The downfall for anyone not on a cruise ship is that the spots to view the displays are extremely competitive and hard – even for Japanese people – to get a hold of. Find out more about Japanese Firework Festivals.

For more cruising inspiration, take a look at our guide to worldwide events to see on a cruise.

A guide to eating in Japan.
A perfect day in Bodrum
Kyoto: Ancient capital of Japan
5 Great Reasons to Eat Locally in Mexico
A guide to Barcelona's neighbourhoods

Festivals in Barcelona
Things to see and do in Rosas, Girona
10 Best photo spots in Edinburgh
8 Must-eat meals in Hanoi, Vietnam
Croatia: A guide to the local food