The Northern Lights, or Aurora Borealis is a phenomena observed right at the top of the northern hemisphere of our planet. During the fantastic display, colourful, natural lights take over the sky and dance with the stars. See this incredible wonder on a Northern Lights cruise.

The reason behind the Northern Lights has been speculated upon for many years. Many myths and legends surrounding them have evolved, from Native Americans believing they are a signal for forthcoming war, and Vikings believing they are the armour of the Valkyries. Scientific attention has been recorded from the early 17th century, with Galileo coining the term Aurora Borealis in 1619.

The complicated explanation for the sight is all about solar flares, gas particles, and magnetic fields, which is why this kind of phenomena is only seen at the north and south poles. Seeing the northern lights up close and personal is at the top of a lot of bucket lists, and how better to see it than from a cruise ship on open water, away from the majority of light pollution, and right beneath the heart of the spectacle? 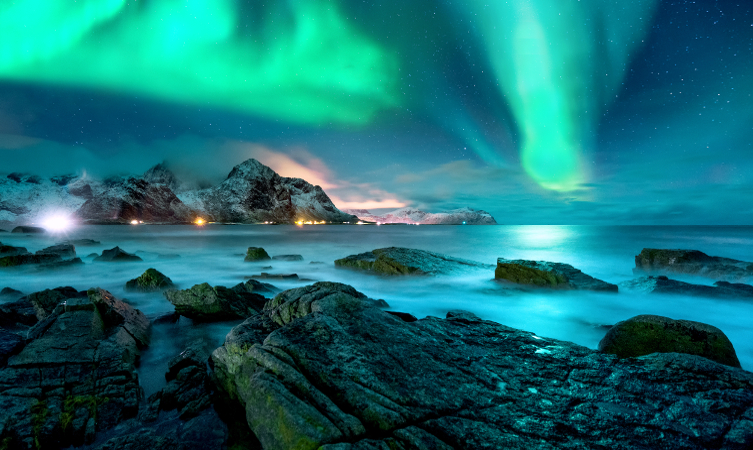 The best time to see the lights isn’t an easy thing to pinpoint, as the nature of the event is unpredictable. They can last anywhere between 10 minutes and the whole night and, as broad as the prediction is, it’s usually best to visit between late September and early April. Another thing to take into consideration is that depending on the time of year, travelling north might have an effect on the daylight you see. In some places it can be as little as 5 hours of light in a day.

The main focus on how to see the northern lights is on where to see it from. To see the lights best, simply cruise north. This would include ports in countries like Norway, Finland, Canada, Greenland, and Sweden. Cruise lines with amazing northern lights themed cruises which go to these places include Cruise and Maritime, Hurtigruten, and Princess Cruises. With these cruise lines you are likely to have a fantastic immersive experience, which could include presentations and informative talks and resources onboard.